TRENDING NOW
Honor 9 Lite Released; Why is Everyone Going Gaga Over it? | Caring for Nintendo Labo 101 |

Nintendo has done it again and the gaming giant has proven itself to be one of the biggest innovators in the industry. The recently released Nintendo Labo for the Nintendo Switch revolutionizes gaming by making it more interactive. Although initial reception of the device is well and good, there are still a few complains circulating it though. For starters, it’s not easy to forget that the Labo, in essence, is just cardboard. However, there are a few good ways to protect it. 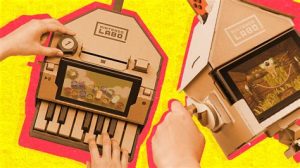 1. Keep it stored in a wider area

Nintendo Labo is, basically, a pre-made cardboard cut-out that you have to assemble, following an interactive guide that comes with it, to have an even better gaming experience. It’s promising, indeed. However, since it’s mainly cardboard, you have to bear in mind that it should be taken care of really well or else, it might get distorted. Users of such Toy-Con should always keep it in a proper storage that has enough space so it would get pinned down by any heavy material that would cause it to get distorted. People who are living in small spaces should always double check if their storage space is enough so that it won’t get flattened out or damaged.

2. Store it in dry place

Nintendo Labo definitely has brought an innovation in the gaming industry. It a new way to interact with a certain game and building it is also a fun way to bond with friends and family. But, in spite of how it was creatively done by the giant gaming company, it is still fragile. Again, Nintendo Labo is merely a cardboard. It may look cool but it’s still a cut-out cardboard – meaning, it is still not waterproof. Thus, users would always have to make sure that their Nintendo Labo is kept away from water leaks or other liquids that would damage the Toy-Con.

3. Build and use it with caution

If you have seen the movie “Toy Story” or if you’ve got kids in your house, you probably know that kids are not delicate with toys. Nintendo Labo is, for the nth time, made of cardboard. Thus, its durability is still a big question. Even if it seems more durable than other plain cardboards, it’s still prone to wear and tear. Its cost is also not a joke. Thus, it’s something that is not like the other toys that can be thrown around without being damaged. That being said, in order to protect your Nintendo Labo, you need to build and use it with great caution. Also, try to keep it out of reach of toddlers as much as possible if you want to make your Nintendo Labo would last longer.

Like any other gadget or device, needless to say, it’s important that you follow the instructions carefully. Doing so would help you perfectly build you Toy-Con and would help you make your Nintendo Labo or any other device in general last longer and possible damages would be kept at bay.